Day 1: MARRAKECH
Arrival at Marrakech airport, we make the transfer to your riad in the medina near Jamaa Lafna square.

Day 2: MARRAKECH – AIT BEN HADDOU KASBAH – OUARZAZATE
Today, we will depart for OUARZAZATE via the famous Tizi Ntichka pass (2260m), over the High Atlas Mountains where we appreciate the beauty of the landscape on the twisted road through the Berber villages. We’ll arrive at Ait Ben Haddou village, the famous Kasbah, built by the last Berber chieftain El Glaoui late 19th century. The Kasbah is recognized as a UNESCO matrimonial historical site, now a house of many Glaoui family members. The lunch by the Kasbah of Ait Ben Haddou and continue to Ouarzazate, “the Hollywood of Africa”, where you have the option to visit and see many props used in movies you may already have seen such as Gladiator, Kondon, and Alexander the Great. The Mummy, Asterix. Overnight accommodation will be in a hotel in Ouarzazate.

Day 3: OUARZAZATE – Kalaat Megouna – DADES GORGES – TODRA GORGES
Departure from Ouarzazate Passing by the Sekoura Oasis, we visit the AMREDIL kasbah, then the valley of the pinks and the road of the miles Kasbahs in Kalaat M’gouna, the famous city for the annual festival of the pinks (see a gum of natural products extracted from the pinks), then you continue to DADES Valley and Gorges, one of the most beautiful oases of Morocco. At the end of the day, you arrive at TODRA GORGES (you will take a walk in the gorges bordered of high cliffs). The night will be at your hotel in the gorges.

Day 4: TODRA GORGES – ALNIF – DARAA valley – TAMNOUGALT
After breakfast, you leave TODRA GORGES towards Tamnougalt Kasbah crossing Tizi N’tfarkhine col, the lunch will be in the restaurant in ALNIF, then you continue to DARAA valley passing by Tazarine village, along with the valley you can visit and take pictures of Berber village and Kasbah. At the end of the day, you arrive at TAMNOUGALTE Kasbah (visit of the Kasbahs) the night will be in a hotel in tamnougalte.

Day 5: TAMNOUGALT – ZAGORA – TAMAGROUTE – ZAGORA
Today, you cross Daraa valley towards Agdez then ZAGORA city, the lunch will be in a local restaurant, after you will go to Tamagroute Kasbah, a very interesting village known for the underground kasbahs, the pottery, the ceramics and the splendid library created at the 17th century where illuminated manuscripts of Coran are preserved as well as works of history and medicine. The night will be at the hotel in ZAGORA.

Day 6: ZAGORA – TAFRAOUT – RISSANI – MERZOUGA
After breakfast, you will leave Zagora towards Merzouga taking track way passing by M’haresh oasis the lunch will in the inn in the middle of the desert, after you continue to Rissani, the ancient desert town and the economic center of the area (visit the market and Moulay Ali Cherif Tomb) then you continue to Merzouga. The night will be at an INN.

Day 7: MERZOUGA (the tour around the dunes; camel trip)
Today we get to learn more about the life of the Nomads in our off-road excursion to the breathtaking Erg Chebbi where we will visit the Nomad families who migrate and live in tents, then we attend an African folkloric music dance performance in Khamlia village, and we will have a walk-in a desert oasis where we learn about the irrigation system of the area.
Late afternoon you will mount camels (camel trip) to pass the night in the bivouac under a traditional Berber tent.

Day 8: MERZOUGA – MIDELT – IFRANE – FES
After breakfast, you depart from Merzouga to Fes through the gorges of the Ziz valley passing by Errachidia then Midelt where you will have lunch. After you leave it through the mountains and the cedar woods of the middle Atlas and After the Zad pass (2,178m/7,146ft) you arrive at Azrou an important handicraft center specialized in the work of cedarwood, then Ifrane city a charming ski resort at the end of the day you arrive in FES. Check-in at the hotel or riad

Day 9: FES
Today you will have a visit of the attractive Medina, El Quaraouyine University, a primitive mosque which was founded in the middle of the 9th Century, the tomb of Moulay Idriss, the founder of FES, the Nejjarine unit sheltering the museum Nejjarine of arts and trades of wood, the Medersa Seffarine which was specialized in the teaching of grammar and Theology, Mellah, the Jewish quarter; and finally the medersa Bou Anania. In the afternoon, you will have souks visits to FES. Check-in your RIAD.

Day 10: FES – VOLUBILIS – MEKNES
Departure from Fes towards Volubilis, Roman ruins close to Moulay Driss Zarhoun, the first man who introduced Islam in Morocco then you continue to Meknes, visit the Tombs Moulay Ismail, one of the rare sanctuaries of Morocco, attics stables of Moulay Ismail, place El Hdim, Bab Mansour, the most famous door of all North Africa, and the medersa Bou Inania. The night will be at the riad in the ancient medina

Day 11: MEKNES – RABAT – CASABLANCA
After breakfast, you will go to Rabat; the administrative capital of the country where you will visit the old medina, oudaiyas, Bab Shella, Tour Hassan, and Hassan II tombs…) then you continue to Casablanca where you will visit Hassan 2 mosque, the medina, court Habous…) the night will be in the 4* hotel.

Day 12: CASABLANCA – ESSAOUIRA
Today, you will go towards ESSAOUIRA; the city was built in the XVIII century in front of the island Mogador, known by its port and particular climate is a destination privileged to the surfers. The city is known for the annual festival of Gnawa music and the cultural activities and artistic of the city. On your road, you will pass by Ejadida, the medieval city occupied by the Portuguese in 1506, proclaimed a world heritage by UNESCO in 2004. The night will be in a typical Riad.

Day 13: ESSAOUIRA – MARRAKECH
After breakfast, you will go to Marrakech, in the afternoon, you will have free time to enjoy the sunset in the Jamaa Lafna square where you will discover many cultural things.

Day 14: MARRAKECH (guided visit of the city)
Finally today, you will have a guided visit to Marrakech city. After breakfast, you will make the visit to the red city Marrakech. We start with Menara and the minaret of Koutoubia. It’s the Twin tower of Giralda in Seville, Spain. The tombs of Saadian which are composed of splendid mausoleums are built in the 16th century. the Majorels gardens also must be visited. The lunch will be at the hotel. In the afternoon go for a walk in the colored souks of the city, and conclude the day in the place of Jamaa Lefna.

Important for our clients:
– The tour itinerary can be modified according to your requirements and budget.
– We are at your disposal for any questions about the tour. What is included in this tour?
– Arrival & Departure transfers.
– Accommodation in Riads or hotels (Optional).
– Private Air-conditioned 4×4 vehicle with luxury interior
– English-speaking driver / Guide.
– Private Camel trekking caravan “1 Camel P/P”.
– Fuel Taxes
– Night in a desert camp half-board.What is not included on this tour?
– Drinks
– Lunch
– Personal expenses and tips

Please do not hesitate to Contact us if any of our listed tours don’t fit your holiday duration in Morocco. We still can arrange one together according to your needs. Thank you. 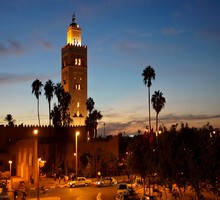 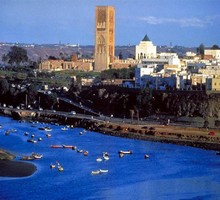 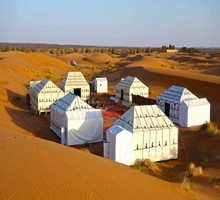 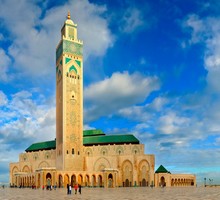